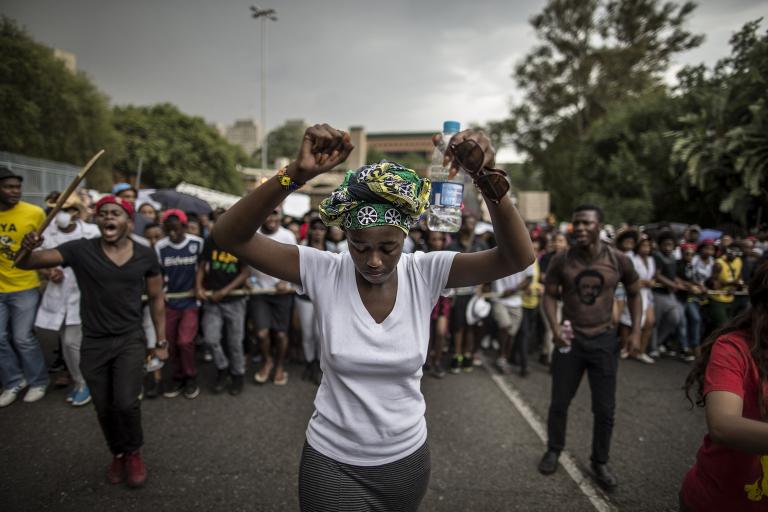 Early one morning last year a handful of students gathered to block the main entrance to the University of the Witwatersrand in Johannesburg to protest the university’s proposed 10 percent tuition fee hike.

Their intention: to physically illustrate the economic barriers faced by those attempting to get into the South Africa’s institutions of knowledge. Protests quickly spread, shutting down lectures nationwide and, on some campuses, leading to violent outbreaks between police and protesters. In marches on Cape Town’s Parliament and the Union Buildings in Pretoria, students were met with tear gas, stun grenades and Nyalas – the armored police vehicles that during the apartheid era were the government’s mobile suppression units of choice.
The protests – dubbed “Fees Must Fall,” which quickly became a popular hash tag – began to die down after President Jacob Zuma said there would be no fee increases for 2016. But they didn’t go away. When universities re-opened in January, protesters gathered yet again. Private security police in riot gear were called to some universities, and for now calm is the prevailing mood on the country’s campuses.

Yet, more protests are likely this year. The country’s “born free” generation, the group of black South Africans born after the end of apartheid in 1994, are growing increasingly impatient. In a country that has one of the widest gaps between rich and poor, the students are angry over what they say is unequal access to education as well as a colonial legacy that continues to confront the majority black population.

“The calls for decolonization can’t be separated from ‘fees must fall’,” says Shaeera Kalla, the University of the Witwatersrand student who, along with Nompendulo Mkhatshwa, helped organize the protests. “Because fundamentally these are all part of the same problem: our universities are anti-poor, anti-black.”

Kalla and Mkhatshwa come from middle-class families, both attended some of the best high schools in the country and both are members of the ruling African National Congress. They and other students say they want the ANC to deliver on promises it made when it came to power in 1994: free education.
“We are not ‘Burn, burn, burn’,” says Mkhatshwa. “This is what we are saying: ‘We put you into power, we trusted you as leaders. And we are reminding you, we need you to deliver.'”

The year of student protest began in March at the University of Cape Town when a young man named Chumani Maxwele threw a bucket of excrement over a 1934 statue of Cecil John Rhodes, the British imperialist who colonized Rhodesia, now Zimbabwe.

The “Rhodes must fall” protests spread to universities across the country, leading to removal of the statue a month later. The rally cry was decolonization and the transformation of the white professoriate and its Western-based curriculum, particularly at the country’s “elite” universities, code for the handful of well-resourced, “historically white” universities like UCT and Wits.
On a Sunday afternoon last November two dozen young men and women gathered for a Johannesburg meeting of the Nzinga Collective, a black consciousness feminist group that was discussing the university fees issue. Before them on a screen was Nomalanga Mkhize, dialed in on Skype. A history lecturer at Rhodes, Mkhize is interested in how the use of African languages in academia can shift the white teaching culture embedded in South Africa’s institutions.

She is not one to mince words.

“Five percent of the population can pay fees. Caitlin’s dad can pay fees,” Mkhize says, using a name that in South Africa is a euphemism for white privilege.
The top 5 percent of households in South Africa, where many white South Africans find themselves, have an annual income that starts at about $35,000. It’s not much on the global scale, but it far exceeds the national household income average of just $2,100 a year. Many in South Africa, with an official unemployment rate of 25 percent, live on small government grants.
These upper-income families can shoulder the costs of $3,000 in annual tuition fees for one of those elite institutions, where the student body has become far more racially reflective of the nation. According to a recent study by South Africa’s department of higher education, a full 75 percent of students are non-white at Wits. Meanwhile, at “historically disadvantaged” institutions like Tshwane University of Technology, where 95 percent of the student body is non-white, the campuses are more likely to be poorly run and poorly resourced, according to the report.

*
“To say we are a non-racial democracy is to misread the moment,” Ferial Haffajee recently told a crowd gathered for the launch of her book, “What if There Were No Whites in South Africa?” Haffajee is one of the country’s most respected journalists. She grew up poor in Bosmont, a so-called “colored” – people with mixed racial ancestry – township on the outskirts of Johannesburg, and was schooled at Wits, immersed in anti-apartheid activism. The Fees Must Fall movement dominated conversation at her launch.
“Our next generation believes they are living in overwhelming whiteness and white supremacy,” she told the predominantly white crowd at the Troyville Hotel, an old hippie liberal hangout in Johannesburg. Such a view presents one of the contradictions of South Africa, where blacks fully control the levers of government but white corporate capital dominates the economic landscape.

Haffajee spoke of the “invisibility” of black people, how they feel overlooked in social interactions and workplaces, where many top bosses remain white. She spoke of the “black tax,” referring to the extended family of six to eight people which black professionals are expected to support. The demand for a national contrition for apartheid – an apology for what was done and the crippling effect it continues to have – is essential, she said. But, she said, they might settle for a wealth tax.

In the Wits Art Museum Café, Natasha Ndlebe sits, a grey wool cap pulled tight to her head despite the heaving heat of a South African summer. She’s a shy person and was a bit bewildered when she was asked to speak at a Fees Must Fall discussion.

Ndlebe, a graduate of Tshwane University of Technology, was covering the protests as an intern at a digital magazine. But after the march on the Union buildings, when TUT students were called hooligans and accused of the protest violence, Ndeble responded in an opinion piece.

“There were no convenient hashtags or journalists from all over the country live-tweeting from our campus about our struggles,” she wrote. “Are we not important enough in the government’s eyes to be heard on our own without support from Wits, Stellenbosch and UCT?”

But why did they have to break things and throw rocks and light things on fire?

“There is no protest that will be resolved without violence,” she says. “It’s the only way the management listens.”
Before the close of 2015, the middle classes had appropriated the students’ anger, as well as their hashtag convention. The cries for “Zuma Must Fall” began after the president sacked his well-respected finance minister and replaced him with someone completely unknown, only to reappoint someone else just days – and massive market repercussions – later.