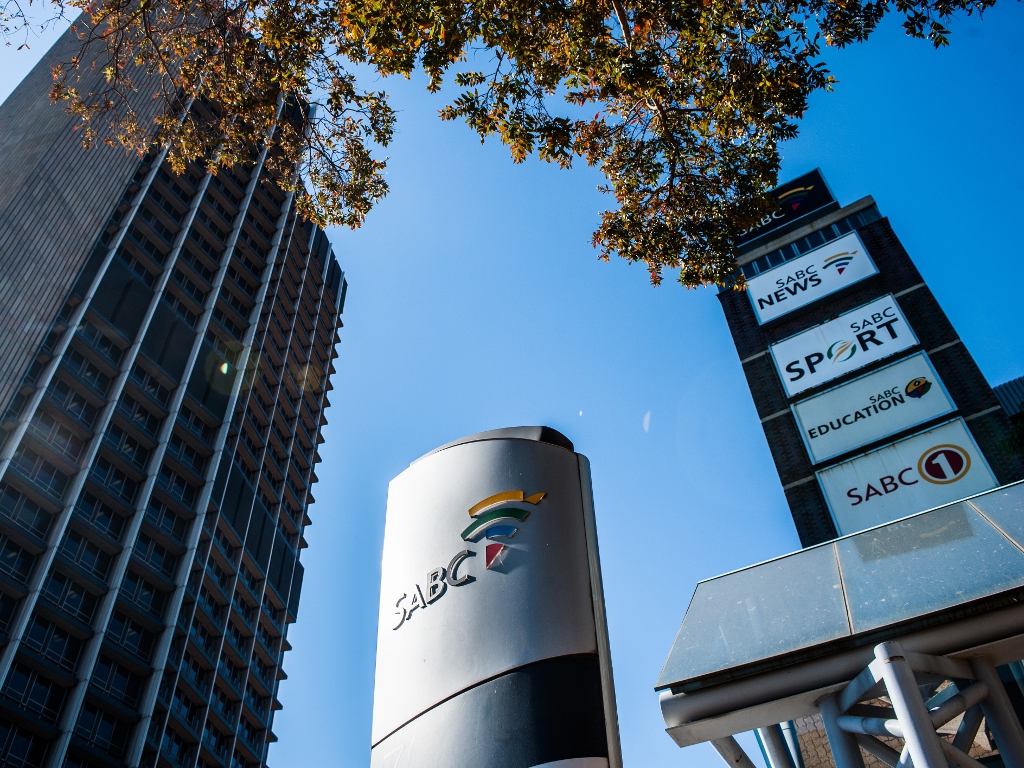 Sometimes the most acute afflictions present in the simplest forms – like the rusted machine that once spit out parking tickets for visitors to the hulking concrete and steel towers of the South African Broadcasting Corporation’s Johannesburg studios, or the escalators meant to glide employees from the ground floor to the lobby.

On the last Wednesday of July both were out of order.

Which meant three of the eight SABC journalists who had been been fired the week before had to climb the stagnant escalator stairs and wait. Some colleagues stopped to offer hugs or words of support before leaving their friends behind, passing through the turnstiles to enter the bowels of the broadcasting beast, whose tentacles reach the nation through four TV channels and 18 radio stations.

They have been dubbed the SABC8 – the eight journalists dismissed after voicing dissent around an editorial policy banning the coverage of violent protests over everything from election battles and employment issues to a lack of basic services. The day before, half of them had been told by a judge they could return to work.

It was the latest in an onslaught of bad news for the 22-year-old democracy’s most influential broadcaster, which in recent years has faced allegations of poor leadership and politically slanted coverage. The SABC’s determination to quash dissent ahead of municipal elections in early August only further fanned concern that it was looking a bit too much like its apartheid-era predecessor, which had been a mouthpiece for the National Party.

“The SABC is cognizant of the fact that citizens have constitutional rights to protest and voice their concerns on various issues that they are not happy with but we also do not believe that destruction of property is the best way to voice those grievances,” a statement from the broadcaster noted in late May. “Continuing to promote them might encourage other communities to do the same.”

The SABC hadn’t been doing much to cover themselves in glory – after the violent protest ban, they announced journalists could no longer read newspaper headlines on air – and that Wednesday was no exception. While the journalists legally won the right to return to work, their employer was still refusing to let them enter the building. On the advice of their lawyers, none would speak to the handful of reporters who hung around the lobby waiting to see where the SABC drama was heading this time.

While election coverage dominated local news, stories around the SABC’s protest policy was keeping reporters from other outlets just as busy.

The foundations of Desmond and Leah Tutu and former Presidents Thabo Mbeki and FW de Klerk released a statement condemning the banning, as did a string of former SABC editors. Amnesty International called the dismissal of the journalists “a cynical and sinister decision designed to entrench a climate of fear,” while the CEO left in disgrace, admitting the “corrosive atmosphere” compromised his moral judgment.

Meanwhile, the agency responsible for licensing broadcasters ruled that the SABC had to remove the ban. But the broadcaster only agreed to lift it 10 days later – after another civil society group had taken it to court.

But by then the SABC8 – made up of Busisiwe Ntuli, Krivani Pillay, Lukhanyo Calata, Vuyo Mvoko, Suna Venter, Foeta Krige, Jacques Steenkamp and Thandeka Gqubule – had already filed an urgent application for direct access to the Constitutional Court, taking on their employers for restricting free speech. The South African National Editors’ Forum issued them awards for their bravery.

Joe Thloloe, a former editor-in-chief of SABC’s TV news who now heads up the Press Council, was on the committee that honored the journalists in a ceremony in Johannesburg. Thloloe joined the broadcaster at the dawn of democracy and was on the team that saw the institution transform from a state broadcaster into a public broadcaster.

“The SABC has always been contested terrain,” Thloloe says. “The people that get onto the board, the various executives that are there, they are pushed by particular factions within government and society. It’s not just now, it’s just come to a head with Hlaudi who is so blatant with his agenda.”

Thloloe is referring to the man at the center of the SABC’s current crisis: Hlaudi Motsoeneng, the chief operations officer (COO) of the SABC, who has effectively taken on the role of editor-in-chief.

In court papers, Motsoeneng, who has been extensively criticized in the local media for his authoritarian statements, his rule-by-fear approach and his constant flaunting of the legal system, is quoted as telling some of the journalists prior to their dismissal: “No journalist is independent. The COO has final responsibility of news. If people do not adhere, get rid of them. We cannot have people who question management.”

This latest round of controversy was not his first. Back in 2014, a report by South Africa’s Public Protector, the agency responsible for investigating misconduct in state entities, found Motsoeneng had lied about obtaining his high school diploma, making him ineligible for his position, as well as for increasing his salary by 60 percent. Motsoeneng and the SABC dismissed the report, ignoring its findings.

It is this sort of impunity that has helped to infuse anxiety throughout SABC’s corridors.

Many journalists working at the organization are convinced their employer is spying on them with cameras and listening devices and admit to self-censoring what goes on air.

“The atmosphere at the SABC breeds paranoia and fear,” says William Bird, the head of Media Monitoring Africa, the media watchdog which hurled the first complaint days after the violent protest ban was announced. “Sometimes these things are true and sometimes they are carefully leaked. Someone will hear a senior manager was exposed because they said something in their office and now they are no longer with the organization. And because there is no accountability and no transparency, it becomes a brilliant exercise in rumor mongering. There is just enough to make you believe it.”

Late that Wednesday in July, after the journalists were turned away from their workplace, more than 30 members of various nonprofit organizations gathered in downtown Johannesburg. Chairing the meeting was Sekoetlane Phamodi, the program director of Save our SABC Coalition, a group formed in 2008 to address ongoing issues plaguing the public broadcaster.

Phamodi ran through the list of demands still yet to be met – including the reinstatement of the journalists and the dismissal of Motsoeneng – and insisted that rolling mass actions against the broadcaster would continue.

By the end of their meeting, news would arrive that the SABC had capitulated yet again. All of the journalists were now allowed to come back to work, with the exception of Vuyo Mvoko, who is on contract and not a permanent employee.

Attempts by the opposition Democratic Alliance for a governmental inquiry into the crisis at the SABC were dismissed in Parliament in late August, but the attorney handling the Constitutional Court bid for SABC8 said their application will continue, currently hanging on Mvoko’s ongoing suspension. Bird, whose organization is involved with case, was confident that the Court would be seeing the SABC case soon.

“It will come,” says Bird. “Even if it doesn’t come in this current form, something will happen soon to give us sufficient grounds to go to the Constitutional Court. The one thing we can be sure of is that the SABC will do something insane.”