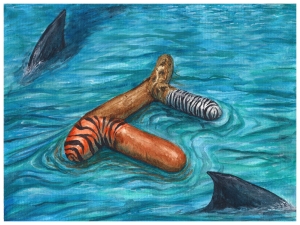 IT WAS NOT UNTIL I READ Life of Pi a few years ago that I realised the extent of my sins.

“It is not atheists who get stuck in my craw, but agnostics,” Pi Patel told his creator, Yann Martel. “Doubt is useful for a while. But we must move on. To choose doubt as a philosophy of life is akin to choosing immobility as a means of transportation.”

There it was, plain as a boy and a Bengal tiger on a raft in the ocean: it was sheer laziness, some sort of aversion to commitment that had led me down the paralytic path of the agnostic.

At various times in the past I have tried to convince myself that if I had my body dunked in holy water, confessed all my sins, imbibed enough scripture and counted enough beads I’d go to heaven and be with my father and my grandparents and live on a cloud for all eternity. Occasionally I think that if I meditated for longer stretches, detached myself from the material, could wrap my head around exactly nothing, breathed deeply enough and without constriction in my heart, I could reach enlightenment and touch God, or at least godliness.

Mine is a sort of touch-and-go belief, an uncertainty of uncertainness, of all gods and none, which apparently pisses people like Pi off. Before I read that passage I thought it was my superior reasoning skills that allowed me to understand so much more than the faithful.

The agnostic is all about reason and who but the unreasonable can argue with that? The Oxford dictionary defines people like me as someone “who claims neither faith nor disbelief in God”. Which is about as close as I can get to an explanation. I am not an atheist — I do not refuse God’s existence — I just know I don’t know and find it all too big for my small brain to begin to understand.

I don’t even remember people asking me about my religion when I was growing up. We celebrated Christmas and Easter in the modern tradition (Santa Claus and the Easter bunny were central to our holidays) and that seemed enough to satisfy most. We did not, however, go to church.

There were two exceptions. When we were very young, one of us four children had to alternate Sunday church visits with my very Catholic paternal great-grandmother.

Nonna would read from her Italian Bible — she spoke no English — and take her communion from the gloriously robed priest as one of her heathen, non baptised grandchildren would wriggle on the wooden pews and gaze up at the vaulted ceilings as she, surely, repeated silent prayers for all of us, destined to an afterlife in purgatory.

Also under duress we attended Sunday school when visiting my mother’s devoutly Protestant family in the summer months. It was there I was taught Bible stories, which I took in much like Greek mythology. I was fascinated by them and separated any connection to historical reality. After all, the stories were fantastical: people rising from the dead, arks filled with animals, the separating of seas and walking on water.

You’d think my parents would have stepped in to explain. But religion, like sex, was not talked about in our house. I didn’t even know my mother cared much about faith until I was 10 and my aunt finally spat it out for me, very likely disgusted by my lack of religious knowledge.

“Your mother was one of the most religious people I ever knew,” my aunt Eunice told me, pulling on a cigarette that hung from her parched lips. “Until your father came along, that is.”

It was meant to be accusatory.

My parents, I learned many years later, married in the Protestant church, away from my father’s family and never admitting to my mother’s parents that he had once been an altar boy in the Catholic church. I suppose when you keep a secret like that from your own parents — something that could have kept true love apart — it’s enough to put you off religion for life.

If religion was discussed in our home, it was to tell us the Catholics sacrificed people to the lions. Or to point to the historical root of some war (pick one, my father would say) as a reference for all the bad things that religion brought about in God’s name. Or to get in a good laugh about some televangelist who landed up in trouble for ripping off his parishioners or spending too much time with prostitutes.

He grinned with pride; I got the joke. Religion, in our house, was for the nonscientific.

As an adolescent I went to a predominantly Jewish private school for three years. I loved going to the bar and bat mitzvahs, secretly wishing I could speak Hebrew and admiring my friends for their dedication to a practice that paid off much better dividends than my piano lessons, which resulted in nothing more than a recital and a pretty dress. By my fifth or sixth I could recite the opening lines of the prayer by heart: Baruch atah Adonai Eloheinu.

When I left that school, I knew as much about Judaism as I did about Christianity, which is to say not much other than the holidays and the rituals that came with them. I knew my place among the chosen people, too. I was a goy, a gentile. Still, my sympathies were with the Jews. We spent much of our history lessons on the Holocaust.

It was that and other mounting stories from history which I learned over the years that seemed to cement what my parents had alluded to: religion divides and conquers and ends in grief and destruction and it’s probably best left alone.

Growing up I believed you didn’t ask about someone’s religion; it seemed impolite to pry about something so deeply personal. I still keep this with me today. But it must have been hard for my father to sit in the pews as his eldest daughter was washed of her sins. My sister, a scientist with a degree in dentistry, would marry a Catholic man and he wanted a Catholic wife and Catholic children. My sister continues to be deeply religious and grimaces when I speak of raising my own daughter without her God.

A few years before my father died, my mother started going back to church. During one of the worst migraines of her life she turned to God and pled for him to turn off the blinding pain. Eventually, He did. After that my mother would occasionally head out on Sundays, albeit infrequently, in the face of my father’s snide comments.

“Your mother is a good woman,” he would sneer if you happened to ask where she was.

She now goes every week to a Unitarian Universalist church, which calls itself a liberal religion with Jewish-Christian roots. Its website says it advocates the “freedom of belief” and the “search for advancing truth”; it is a sort of religion without rules.

My mom sings in the choir. I’m certain it’s the community, the quietness, the song, the introspection she seeks and perhaps missed all those years.

My husband and I chose to get married on a private island in an entirely nonreligious ceremony in Mauritius 12 years ago. I wore a red dress, perhaps to mock the gods. They came back and showed me their power: three days after we were married my father died. Sudden-death syndrome, they call it. It means they don’t really know what killed him.

We flew back to Los Angeles and, after my father’s memorial service, were married again in my parents’ garden by my mother’s Unitarian minister, a gay woman in a priestly robe who also had presided over the ceremony for my father, which more than 300 people attended.

My mother was, and continues to be, shattered by her loss. That day, in the bright afternoon sun, she was reduced to what she was before him. She wore her wedding dress, her blue eyes naked and stunned into vacancy.

Me? I meditate, or try to, as much as I can. I dabble in Buddhist beliefs and follow Deepak Chopra and the Dalai Lama on Twitter. I spend most weekend mornings in various yogic positions. I have had my chakras cleansed, my palms read, asked Jesus for forgiveness, read the Tao Te Ching, spent a week in silence, prayed in ancient churches in Rome and revelled in Ramadan in Tunis. But try to pin me down and I’ll squirm.

Unfortunately, my father told me a few too many times, when you’re dead you’re dead. And he is most certainly dead, no matter how many times I have tried to wish him back to life. Although I swear I feel him sometimes, sitting over me as I write, moving with my fingers over the keyboard, telling me he was wrong and he is there. That I should believe in something, at least.

But I end up abandoning those thoughts as quickly as they come as silly and unrealistic and going down the road of rationality.

That I am a writer, a journalist who cannot even attempt fiction, so tied to what I can test in pursuit of a truth that I can touch, seems to attest to my state of being. I am, it appears, cursed with reason.

It’s what Pi accused the agnostic of anyway.

“I can well imagine an atheist’s last words: ‘White, white! L-L-Love! My God!’ — and the deathbed leap of faith. Whereas the agnostic, if he stays true to his reasonable self, if he stays beholden to dry, yeastless factuality, might try to explain the warm light bathing him by saying, ‘Possibly a f-f-failing oxygenation of the b-b-brain,’ and, to the very end, lack imagination and miss the better story.”